A small mini series (three parts) on GNU Emacs; Klaatu tells you how to use it, when to use it and when not to, why you'd want to use it, and most of all - how to become a pro on it! Not a sales pitch for Emacs, just a harmless introduction. First try is free. 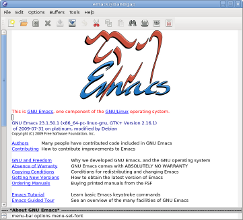 GNU Emacs is an extensible, customizable text editor—and more. At its core is an interpreter for Emacs Lisp, a dialect of the Lisp programming language with extensions to support text editing. The features of GNU Emacs include: